Schools in Greater Lansing are benefiting from fresh produce in their lunchrooms thanks to a Michigan program aiming to get farm-fresh food onto lunch tables.

The 10 Cents a Meal program, administered by the Michigan Department of Education, gives schools 10 cents for every meal they serve to children that includes a local fruit, vegetable or dried bean. This funding aims to make it easier for schools to afford fresh and local foods.

“We’ve been doing some different things like squash and root vegetables, which a lot of kids have never seen or had,” said Evan Robertson, director of food services at Holt Public Schools, which got involved with 10 Cents a Meal in 2020. “It’s kind of cool that we’re able to try to introduce them to other kinds of food that they don’t have at home.”

Robertson said children get excited to have different fruits with their lunches. He said that seeing them get excited over something so simple makes the program worth it.

“A really big winner is the students here,” he said. “It’s common to hear kids say that school is the only place they have access to certain fruits.”

Christine Parkhurst, director of food & nutrition services at Okemos Public Schools, said the program has significant financial benefits for her district. The district has been able to increase employee’s wages and buy compostable trays for school lunches thanks to the savings.

“We are receiving higher reimbursement rates,” she said. “With that extra money we can purchase new things.”

A Michigan farmer was invited to East Lansing Public Schools to meet the students who eat his produce. Sandra Leach, the director of dining services for the district, said students loved that he passed out Michigan apples for them to try.

“I love it because it gives the opportunity for students to see where the food is coming from,” she said.

Diane Golzynski, a director at the Michigan Department of Education, said that 10 Cents a Meal impacted an estimated 43,000 students in 2016. Today, it benefits 500,000 students. Originally, the program only served two regions of the state and now the program has spread to across Michigan to 55 of the state’s 83 counties.

The program started with $250,000 in state funding in 2016, she said. It received $5 million of funding from Michigan Legislature in 2021, double the amount it received in 2020. Golzynski said that it’s benefiting local farms.

Golzynski said she’s never found anyone against increasing funding to this program.

“This is one of those rare programs where everybody involved wins,” she said. “The farmer (gets) additional business, the school gets additional funding to help them pay for the food they’re serving to the kids and the kids get great tasting food that’s grown by their neighbor.” 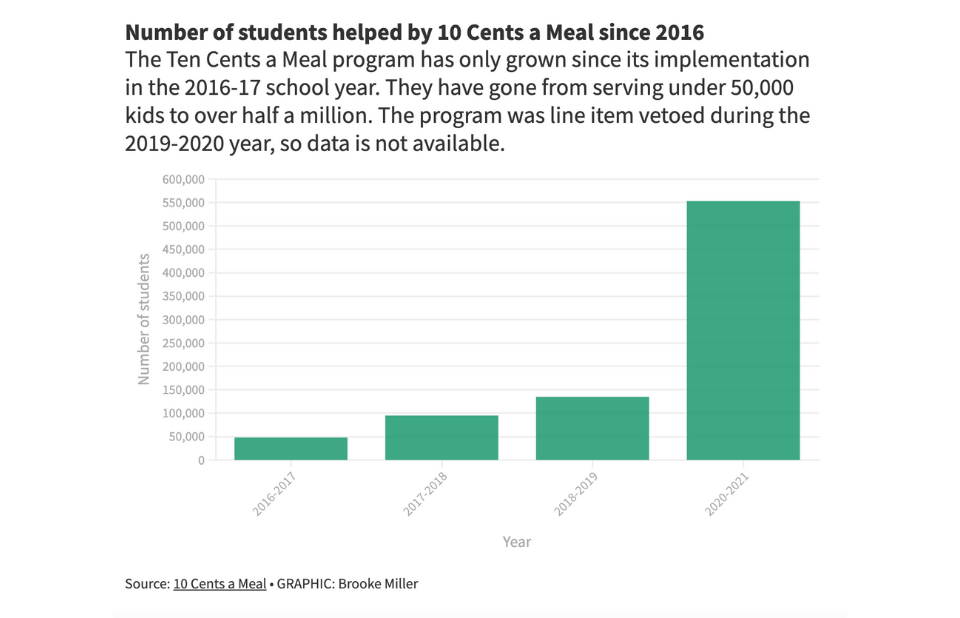 David Coveyou, owner of Coveyou Scenic Farm Market in Petoskey, has been involved with 10 Cents a Meal since 2016.

Coveyou said since his customer base is seasonal in tourist-centered northern Michigan, the program has allowed his farm to increase its sales during September and October, months that are otherwise slower. Coveyou’s farm grows produce like cherry tomatoes, lettuce and cauliflower.

“As our produce in our field keeps evolving going into the fall, all of our summer customers are heading back south again,” he said. “When the best produce is available, we can then start selling it to the school systems.”

Food from Coveyou’s farm could end up in lunchrooms anywhere in Michigan.

“What we’re finding is that these kids absolutely love the fresh produce. The flavor is so much better and they really enjoy eating it,” he said. “We’re changing food habits in young people.”

She said farm-to-school foods can be a win for kids, workers and communities, but there are things like racial and economic inequities that block access for some.

“We have to dismantle inequities,” she said. “We want to ensure that all communities see the benefit of these wins.”